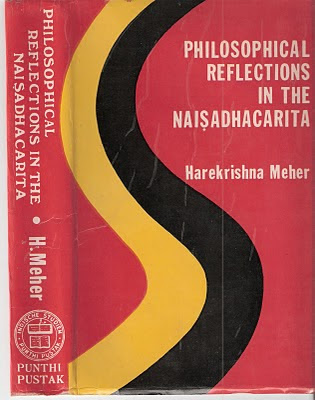 “PHILOSOPHICAL REFLECTIONS IN THE NAISADHACARITA”

The Doctoral Thesis of mine done in Banaras Hindu University in 1981 throws much light on philosophical ideas as reflected in the Sanskrit Mahakavya ‘Naisadhacaritam’ authored by the distinguished poet Sriharsa.

through the websites of several renowned international publishers and booksellers.
*
Some extracts are presented here from my book
“PHILOSOPHICAL REFLECTIONS IN THE NAISADHACARITA”,
By : HAREKRISHNA MEHER


Introduction :
The Naisadhacarita of poet Sriharsa enjoys a prominent position among the five great epics of Sanskrit Literature. This epic contains twenty-two cantos completed with 2827 verses. Its main theme is the story of love between Nala, the King of Nisadha and Damayanti, the Princess of Vidarbha. The story of Nala and Damayanti is found in the Mahabharata of Vyasa and Katha-Sarit-Sagara of Somadeva. The episode of the epic has been taken from the Mahabharata. Poet Sriharsa has remodelled the story and has added the sentiment of love to it. *

In the concluding verses of each canto of the epic, poet Sriharsa has laid bare his identification. Srihira was his father and Mamalla Devi his mother. As the tradition tells, Sriharsa’s maternal uncle was Mammata, the reputed rhetorician and writer of the Kavya-Prakasa.* Sriharsa himself speaks of his own tribute of getting two pieces of betel and a seat from the King of Kanyakubja. However, the name of the king is not stated by the poet. From Rajasekhara’s story and discussions of Pandit Sivadatta, it is maintained that Sriharsa was the honourable court-poet in the reign of King Vijayacandra and his son Jayantacandra of Kanyakubja. Historically, this Jayantacandra is known as Jayacandra who is associated with Prithviraja and Samyukta. So from this evidence, poet Sriharsa is assigned to the latter half of twelfth century A.D.

As a matter of fact, this epic poem in some verses appears to be critical. The poet seems to have wantonly wrought his composition stiff and not easily intelligible. He himself remarks that he has written such a literary epic in order to pulverize the pride of the vain-glorious scholars of his time. In his philosophical book ‘Khandana-Khanda-Khadya’ also, he holds such view and advises to triumph over scholars in literary and philosophical discussions. It may be recalled that challenging discussions and scholastic presentations were the intellectual fashion in his time and milieu.*

Despite verbal complexities, Sriharsa is conscious of the usage of appropriate words conveying intended meaning. As he opines, verbosity and levity of meaning are two poisons of speech, and eloquence forms the speech that is precise and essence. The Naisadhacarita gains commendable celebrity for the grace of diction (Naisadhe Pada-Lalityam). * The poet is regarded as ‘Slesa-Kavi’ (Pun-Poet). This epithet of his own is not unjustified, since the affluence of puns is oft-observed with grammatical propriety throughout his writing. In his epic, the opening verse in praise of Sun-like King Nala obviously heralds the profusion of prolific puns. Vaidarbhi is the favourite Riti of Sriharsa.

As a patron of Indian culture and heritage, the poet pays patriotic tribute to the Motherland India in the speech of Princess Damayanti. India is depicted as a holy land of deeds, enjoyment and virtues, better than heaven, the superficially attractive land of impermanent enjoyment only. So the princess cherishes her heartiest aspiration to choose Nala, the king of this mundane land, by rejecting Indra, the king of heaven. The poet also communicates philosophical message for well-being of the world.*

Sriharsa’s Naisadhacarita seems burdensome for general readers; but it serves as a repository of epical riches. This literary composition earns high admirations from many noted Sanskrit scholars, both oriental and occidental. For the felicitous expression, bold approach, intellectual relevance, emotional charm, scriptural significance, philosophical probing and above all, scholarly structure of Indian wisdom, this epic is renowned as a monumental masterpiece in Sanskrit. *

The Khandana-Khanda-Khadya (lit. “The Sweets of Refutations”) popularly known as Khandana is his masterpiece in philosophical polemics. The poet refers to the Naisadhacarita in his Khandana-Khanda-Khadya, also to the latter in the former. As a devout philosopher of Advaita Vedanta, the poet shows his scholastic refutation of Nyaya views and establishes the monistic canon in his philosophical work.* Both the literary and philosophical compositions of the poet-philosopher Sriharsa mark a new epoch in the study of Indian philosophy, especially of Advaita Vedanta and place him in the distinguished series of the Sanskrit scholars of India.

‘Philosophical Importance of Naisadhacarita’ :
In the Naisadhacarita, both Indian literature and Indian philosophy are interestingly interwoven. Indian philosophy has the celebrity all over the world for its intellectual and practical eminence. The keynote of almost all the philosophical systems is the realization of Truth and Self, annihilation of mundane sufferings and attainment of supreme happiness. Ways are many, but the destination is one. Sriharsa’s epic has several philosophical trends in the light of the thoughts revealed by the minds of the great Aryan thinkers.

Poet Sriharsa is a deep-delved philosopher. His Naisadhacarita, even with its epical characteristics, forms a philosophical profile. This literary composition addresses itself to a critical review of social norms and ethics. Romanticism of the Nala-Damayanti-episode reigns superb; yet other factors of life are also taken into account in the greater perspective of human existence.

Sriharsa has not dilated upon all the topics of all the Indian philosophical systems; still his philosophical purview provides a general survey. Various philosophical notions are compressed and communed with the literary matter of the epic. No sequence is seen in the philosophical allusions and they are found scattered in over two hundred and thirty verses of different cantos.

For the philosophical affluence with scriptural influence, Canto-XVII is really remarkable. Some definite items of almost all the systems, theist and atheist, spiritual and non-spiritual, orthodox and heterodox, are traced with unfailing philosophical focuses. This significant canto forms an excellent index of Sriharsa’s dexterous genius, originality and inviting innovations in the philosophical sphere.

It may be observed that with the infusion of philosophical phenomena, Sriharsa’s aim is to suitably embellish the aesthetic status of his literary work and to sincerely evince his philosophical acumen as well. He has successfully designed his poetic art with the philosophical features noticeable not only in plain illustrations, but also in many a double entendre.

Sriharsa’s eruditions on all the philosophical systems are very well marked and the sublimity of Monistic Vedanta has been maintained in the Naisadhacarita. Literary merit has not been belittled by the philosophical concepts inserted into the literature; rather it has been enhanced, since they have been contextually and befittingly utilized as some favourable figures of speech without causing any levity of meaning and without marring the literary beauty of the epic.

Bearing, though unsystematically, the outlines of diverse philosophical aspects, from Carvaka upto Vedanta in a bird’s eye-view, this literary epic appears as an epitome of Indian Philosophy weighed carefully by the poet-philosopher Sriharsa. Through the scriptural and canonical connections, all the thoughts signify the cultural heritage of the vast country of India and Indianness.

* *[ For details, please see My above-mentioned book
“Philosophical Reflections in the Naisadhacarita.”]