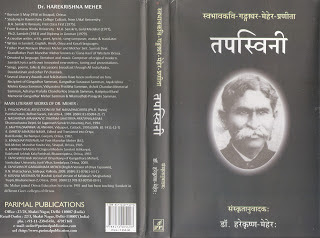 Posted by Dr. Harekrishna Meher at 3:26 AM No comments:

= = = = = = = = = =
[All Eleven Cantos have been taken here from the Books.]
= = = = = =
Tapasvinī, an eleven-canto Oriya epic poem, is the magnum opus and a great classic of Poet Gańgādhara Meher. With the prevailing sentiment of Pathos, this kāvya depicts the post-banishment episode of Sītā in the hermitage of Sage Vālmīki. Here Sītā, the adorable daughter of Earth and the devoted wife of King Rāma, in her later life appears as a Tapasvinī, ‘A Woman practising penance’ or ‘An Ascetic-maid’. In this Rāmāyana-based literary composition, the poetic presentation is well-embellished with originality and significant innovations. Like Kālidāsa in Sanskrit and William Wordsworth in English, Gańgādhara Meher is regarded as ‘Prakŗti-Kavi’, Poet
of Nature, in Oriya literature.

This epic poem reveals the ambition of the poet to portray the brilliant character of a devoted wife steeped in Indian culture. With vivid and prominent delineation of Sītā’s life-deeds, ‘Tapasvinī Kāvya' may be construed as a ‘Sītāyana’ in the field of Indian Literature.
= = = = = =

Posted by Dr. Harekrishna Meher at 1:52 AM No comments: 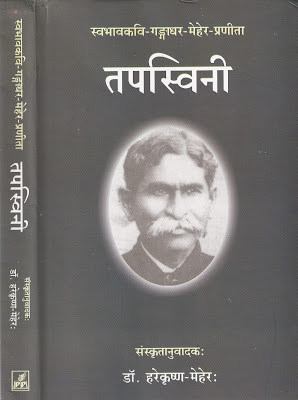 Posted by Dr. Harekrishna Meher at 12:18 PM No comments: