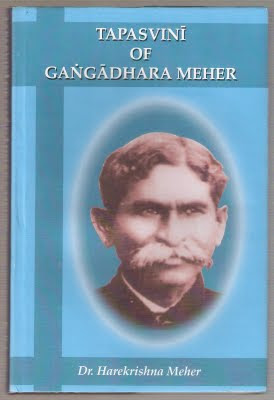 Poet Gangadhar Meher (1862-1924) is well-known as 'Prakriti-Kavi' of Oriya Literature. Every year on the day of Sravana Purnima, his Birth-Day is enthusiastically celebrated with much pomp and ceremony all over Orissa. His popularity has been so wide-spread that even in small villages and schools, his Jayanti Celebration is endearingly organized in his honour.

On the occasion of 147th Jayanti Celebration of Poet Gangadhar Meher on Sravana Purnima (5-8-2009) in Poet’s native place Barpali of Orissa state, the English Book entitled
“ TAPASVINI OF GANGADHARA MEHER ”
(Complete English Translation by : Dr. HAREKRISHNA MEHER)
was inaugurated in the Function organized by Gangadhar Sahitya Parishad, Barpali at Kavi Bhavan, the sacred home where the poet composed his immortal literary works.
*
The Book (ISBN : 81-87661-63-1. Pages-220) has been published by :
R.N. Bhattacharya (Book Publishers and Exporters),
A-217, H.B. Town, Road No.- 4, Sodepur, Kolkata- 700110, India.

In this Celebration, Esteemed Guests and august personalities present were the noted writer and litterateur Padmashri Srinivas Udgata, Prof. Narayan Pruseth (Retired Principal of Women’s College, Bargarh and President of State Level Swabhava-Kavi Gangadhar Smruti Samiti, Barpali, Orissa) and Prof Ramakant Ray, Ex-Principal of Barpali College and President of Gangadhar Sahitya Parishad, Barpali. Members of Orissa Sahitya Akademi along with Dr. Tirthananda Mishra and Dr. Krishna Keshava Sadangi were also present there. Dr. Manindra Kumar Meher anchored in this Celebration. The Function was accomplished with various literary discussions in honour of the Poet. Prof. Pruseth presented reviews of the English 'Tapasvini' Book discussing the universal value-based writings of Poet Gangadhara Meher. The Book was well appreciated by the learned audience and media-persons of several newspapers as well as of Doordarshan, ETv and other channels.
The Book has been Dedicated by the Translator to the Sacred Memory of his Revered Father Poet Narayan Bharasa Meher and Mother Srimati Sumati Devi.

" Wandering over several woods wide,
never wavering astray
by illusion of any gorge,
surmounting many an impediment
in my life limpid,
never deeming darkness
as a distress,
never thinking light
to be a delight,
for a remote way
ahead I’ve continued to forge
with my head humbly bent.
Gratifying every bank-dweller
with offering of water,
fruitfulness of my birth
I’m realizing worth." . (Tapasvini, 4/11)
= = = = = = = = =

*
(Here it is worth-mentioning that onour of the Poet. Prof. Pruseth presented reviews of the
Tapasvini 's Complete Hindi Rendering
by Dr. Harekrishna Meher
has been published by Sambalpur University, Jyoti Vihar, Burla, Sambalpur, Orissa in 2000 and has been appreciated by the loving readers.)
* 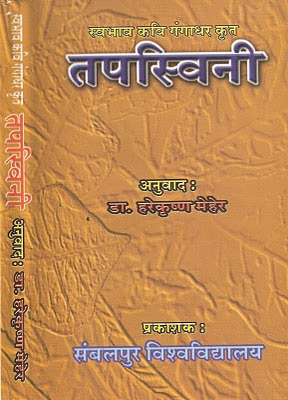