Posted by Dr. Harekrishna Meher at 12:09 PM No comments: 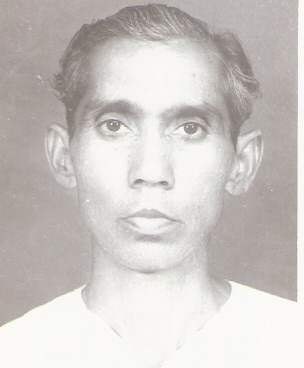 Sri Narayan Bharasa Meher served as the Headmaster of Sinapali Centre U.P. School for several years and he was also in the post of Sub-Inspector of Schools. He retired from his service in 1979. Since early age, he got immense inspirations from his father Poet Manohar Meher for writing poems and other literary creations. Hailing from a poet’s family, with individual efforts also, he became well-versed in various Sanskrit works and Oriya literature of great writers. He was well-acquainted with Hindi, Sanskrit, English, Koshali and Bengali languages also. His poem-writing in Oriya began in 1942. His first original writing is ‘Bighnaraja Stava’ (A book with prayer and eulogy to Lord Ganesha, the Adorable God of Learning). It has been published by Arunodaya Press, Cuttack in the same year 1942.

Narayan Bharasa Meher was an ideal teacher, poet, lyricist, translator and social reformer. In his literary writings, the words are very simple, lucid, attractive, graceful with poetic attributes. His language and sentiments are co-related with serenity. Some of his Chautisha writings bear the influence of ornate-style found in Riti Yuga of Oriya literature. He has written in several classical poetic metres along with some folk metres of Oriya. Contextual applications of various Alankaras (Figures of speech) such as Upama, Rupaka, Anuprasa, Arthantaranyasa etc. attract the mind of the readers. His poems are imbued with various sentiments of literary aspects.


Bhakti Rasa (Sentiment of Devotion), satirical touch towards social corruptions and pollutions, reflections of Indian Vedanta philosophy, worship of Nature, preservation of forests and natural phenomena with environmental affinity, enhancement of social education and positive reformation, eradication of illiteracy and other social superstitions, establishment of Indian culture, theism, philanthropic attitude, humanitarian concepts and the like are found in his compositions. His poems are based on mythological, epical, spiritual and social topics. Traditional values with modern touch are depicted for a greater prospect of humanity at large. His poetic pen is inclined to realistic perspective and positive thinking for the social development in different aspects of life. His books of poems have been published from Cuttack, Berhampur, Bhawanipatna and Khariar.

He has published the book “Manohar Padyavali”, a Compilation of Poems and Songs of his father Poet Manohar Meher (1885-1969) on the occasion of ‘Kavi Manohar Meher’s Birth Centenary’ in 1985. With his son Dr. Harekrishna Meher, he has compiled “Manohar Granthavali”.


He was Founder- President of Manohar Sahitya Samiti, Sinapali. For his literary contributions, he was honoured and felicitated with Manapatra by Khariar Sahitya Samiti. He was recipient of ‘Mayur Publication Award’ (1990). As a senior poet and litterateur, he was honoured with ‘Saraswat Samman’ bearing Tamra Phalaka Prasati, memento and shawl by Orissa Sahitya Akademi, Bhubaneswar on 29 June 1994.

His Biography has been published in “Who’s Who of Indian Writers” (Sahitya Akademi, New Delhi), “Reference India”, “Indo-American Who’s Who” and some other biographical volumes.

Posted by Dr. Harekrishna Meher at 12:01 PM No comments: